I went to a talk on social media the other day and the speaker mentioned the big three quite a lot: YouTube, Facebook and Twitter. Of course there are so many competing social media websites that I wouldn’t expect them all to be featured. However, I asked a question at the end about Google+ and whether he felt it was important. His answer was that Google+ had relatively few users in comparison to the big three and that so far it hadn’t made its mark. This analysis may be fair but to me there are many pointers that being on Google+ is important.

In the same way that Apple has developed technology that works together as a whole, Google is doing the same. Clearly its powerful search engine is at the core of everything they do but they offer many services beyond this and one of them happens to be a social media platform that is already giving its users benefits. Since I signed up and linked my account to Regen Media, my photo now appears next to my posts as below. 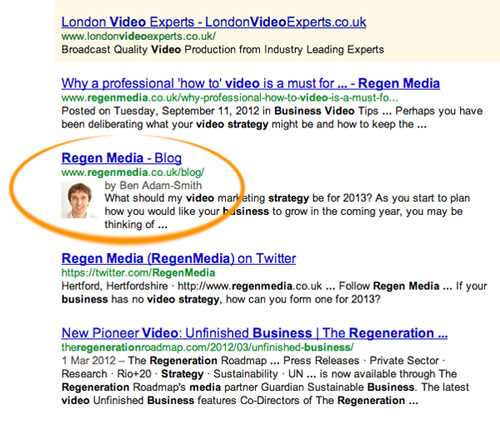 This is a big bonus to a listing as people like images and it makes it stand out from other traffic even higher in the ranking. Effectively Google is verifying to its users that you are the actual person who has authored this content. Find out how you can implement Google Authorship.

Our friends at Music Radio Creative have been on Google+ much longer and even benefit from their logo being shown to the right of the listing. 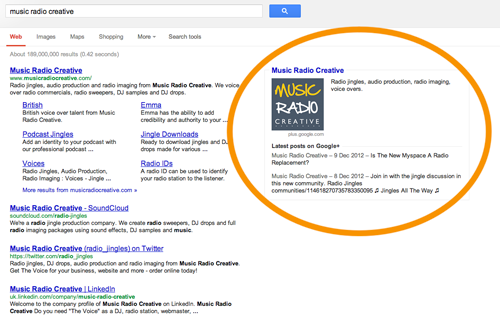 It’s also worth noting that up until now the core users of Google+ have been the tecchies. You may not see this as a great advert but many of them are thought leaders when it comes to the internet and they have always seen the potential of Google+. Now they must be laughing! Google seems to be making Google+ central to its online experience.

This is their newest addition to the site and a rival to Facebook Groups or LinkedIn Groups. It’s really simple to get going and there are already thousands of communities to join or you can set up your own. Running your own community can help cement you in your niche and may even impact on SEO around you or your business.

Since Facebook has become more focussed on their revenue they have also lost favour. People are unsure about whether their friends or clients are seeing their updates. Paying to promote yourself is Facebook’s answer to this problem!

A Dark Horse in Google+

Google has significantly invested in Google+ and although it may not be the overnight success some might have anticipated, over a year on, it is looking likely that it will become central to the Google experience. If you have seen it as just another social network, remember it is a social network that Google runs! It must be worth dipping your toe in the water?